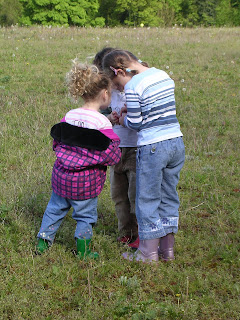 A 'mention' on Twitter just now got me thinking:
Perhaps @workingorder has tips for tidying up children as well as homes & offices.
First reaction: good grief, no. How on earth does one do that?
Second reaction: how would I know? As a non-parent, I've never been there, so how would I dare to comment?
Third reaction: well, actually...
It's been clear to me, throughout my experience of 'stuff management', that young folk are often very receptive to a structure for organisation. And before you fall about laughing, I don't mean that they have a natural dispensation to the minimalistic. What I mean is that they like life made as easy for them as possible (and I can empathise with that sentiment, believe you me).
One household of my acquaintance had an adorable toddler: a little lass of about two years old. Part of our work was to create a special area for her in the side area of the kitchen - a sort of breakfast area, half-divided off from the kitchen proper but visible to mum. As a result of our work, a sideboard was relocated in there (from the dining room, where it had taken up too much room so the doors were unopenable, and the stuff stored inside inaccessible as a result).
At the perfect height for Small Person, we stocked it with little plastic baskets: one for Lego, one for dollies' clothes, one for Precious Things... you get the idea. On the top surface stood larger toys: the doll's house, the toy train. The point is, Small Person loved this. Putting the right stuff in the right box became as much of a game as working through a jigsaw, and built into the bedtime routine it gave her a natural sense of order.
Ah, you say, but what about teenagers? Here we can appeal to their sense of values. I was thrilled on a revisit to a family to learn that the young teenager had (with no help from me, but with inspiration from what I'd done for mum) set up her own eBay and PayPal account (with parental help & permission, of course). The deal was that, if she sold an item on eBay, the money went into her personal PayPal account... and when there was enough money in there, she was free to spend it on whatever she wanted - usually once again on eBay. Desperate for some reasonably expensive item - an upmarket item of clothing, a game for the Wii, whatever it was - she sold everything that stood still long enough. Result? The item that she really wanted was hers, and an unnaturally tidy bedroom to boot.
The key to all this, however, is always simplicity. There's no point in micro-organising (as I've said in other posts); children or adults, few of us (myself included) have patience for keeping things in a perfect and rigid order. I have no time for filing CDs by composer; if I want to find my recording of Kander & Ebb's Chicago, I know it will be somewhere along the two shelves that contain (loosely speaking) songs-from-the-shows. If I make my life easier in this way, the organising is far more likely to get done than if perfection is insisted upon.
Let kids put books on an easily-accessible set of shelves, but with no more ordering than that, and it's far more likely to happen. Have the laundry basket in the place it's most likely to be used, rather than through a door and into another room. If they won't put shoes tidily on a rack, have them chuck 'em in a box the minute they get through the door.
One final example. One of my favourite clients was a delightful chap who has ADD (Attention Deficit Disorder) and his wonderful wife. He taught me just as much as I was able to help him: the simpler the system, the easier it is to do, the more likely he is to do it. If I'd said "put your bank statements in chronological order", it would never have happened; but saying "just put them in that drop-file with the other statements from the same bank" still narrowed down where he'd find them, and the process was far more likely to happen. "Putting his books away" meant "sling them all in that space of two shelves", not "put them in order". Bite-sized chunks - very large ones - were the order (pardon the pun) of the day.
So yes: there are ways to get some buy-in from the younger members of the family. And, who knows? Some of these ways might just apply to the bigger people in your life as well.
Posted by Cassie at 15:25