Thinking there must be an easier way? There is.

When I work with my clients - whether they need help with their home space, office space, clutter clearing, computers or whatever - one issue that arises time and time again is that we so often don't know what we don't know. We struggle with a process or a technique because that's the way we've always done it - not realising that a change of approach can make life so much easier.

My challenge is "If you find yourself thinking 'There must be an easier way', then trust me - there always is."

This is especially true when using a computer. A great example of this was when I was asked to help a colleague on a completely unrelated difficulty ("it won't print", I think), and discovered that he was keeping a grid of numbers in a Microsoft Word table - and then using his calculator to add up the totals. I copied and pasted the table into Excel (which he'd never used before ["only the Accounts department use that, don't they?"]), put in an extra row for the totals above his manual totals, copied in the automatic formulae, and hey-presto: all the calculations happened as if by magic. (Not only that, but he discovered that a large number of his own manual calculations had been incorrect.)

My colleague was flabbergasted by how much time he had previously wasted by trying to do the computer's job for it (and, in this case, doing it less accurately). As the office in question was at a local council, this was effectively tax-payers' money that was being wasted every time he took three times as long as necessary to perform this particular task.

The point was that it really wasn't my colleague's fault. He had never been shown how to use Excel as a tool; the fact that he'd discovered Microsoft Word tables on his own was quite an achievement. He didn't know that he didn't know. If he'd known that he didn't know, he could have asked the IT department to help him out. I only discovered the situation by mistake, and was able to save him time in the future that was vastly in excess of the time it had taken me to train him in the solution.

Does this apply to you? Are you struggling to operate processes that seem to be taking forever? Is it too easy to make mistakes?

If so: please let me help you. I can promise you faithfully that if you brainstorm a few regular processes that are causing you to struggle, in a fairly short time I will be able to provide solutions for the majority of them; and if I can't, I'm likely to know somebody who can.

Computer processes are the most likely area where this situation arises, but it's not unusual for the same to apply with the arrangement of furniture, storage, filing or any other objects in the home or office.

Remember: if you think there must be an easier way of doing something, there is. Just let me help you to find out what that easier way might be. Contact me today - and let's find it for you.
Posted by Cassie at 10:56 No comments:

A little time can make a big difference

Sometimes we get bogged down with the idea that we need to invest loads of time and/or loads of money to make a difference. It's just not true!

While some jobs may take a full day, or several days together or spread across a period of time, it's also very satisfying when a brief session of just an hour or two can make a big difference - with minimal cost and stress. For example:

There's one of my favourite IT clients: a wonderful octogenarian (do you think you're too old to use a computer?) who calls me from time to time with a neat list of queries that she's been building up. We sit down and focus on those specific needs, for around two hours, and then I might not see her again for months. She's left comfortable with the knowledge she's gained, and happy to continue on her own.

There was the lady who used just two hours of my time to make suggestions about better storage solutions in her flat. We didn't actually do any physical work; we simply planned, threw ideas around, checked some possible storage purchases online, and I left her with a shopping list and a plan of action. She called me a couple of weeks later, completely triumphant at the changes she'd been able to implement, but "I would never have managed it without your ideas".

There was the lady whose whole house was in need of sorting; but we spent just one day, seven hours long, on the most troubling room (the sitting room). We ended up with a full car each - hers for the charity shop, mine for the tip - and she looked around and said "It's like having had the plumbers in. Now I can carry on and do the rest myself. The books in my bedroom can now come in here, so the items in the attic that belong in the bedroom can then move in there..." She'd got it. She understood the processes we'd been through, and how to continue with them for herself; but she'd previously been overwhelmed by where-to-start syndrome.

Would it help you to invest in a little time for yourself?
... go on, give it a go. You might be surprised just how many solutions we can find together in a short time!
Posted by Cassie at 16:23 No comments:

What it's all about

I sometimes have great trouble explaining succinctly what I do, and what the benefits are. (As any of my friends will tell you, brevity of expression is not really my strong point.) So I was delighted to see that my favourite blogger, the lovely Tania Kindersley, has in her posting today expressed those benefits so much better than I could:

"...once I am actually doing it, I get a burst of energy, and realise that I have the capacity to make my room look really quite nice. The simple fact of moving things around can make a huge difference. Clearing away the clutter reveals the lovely items I have collected over the years, and I may notice them with love, instead of just seeing too much nonsense. The effect of hoovering itself always astonishes me. Just getting rid of a bit of earth and dog hair and the stray bits of grass I bring in on my boots utterly transforms the room. I feel there is a proper life lesson there, something about small, mundane things making a huge difference."


Exactly. So many people consider the processes of decluttering and organising (which are, by-the-by, two entirely different things) and fear the perfection (and unattainability) of minimalism. There is, of course, absolutely nothing wrong with minimalism if it's a style that happens to float your boat; but for most of us, the 'small, mundane things making a huge difference' are far more achievable and practical.

And as for Tania: well, the photographs of her beautiful residence, way up in the wilds of Scotland, show a home and not a house. A place to live and relax, to welcome guests, to share and to to enjoy. A place where you can put your feet up without feeling intimidated; a place where her small relations can jump around and have fun; a place where the adorable Pigeon (a canine who is adored by hundreds of people who have never met her) will not be told off for muddy paws.

The balance between tidiness and obsession, between comfortable and slovenly, between house and home: that is what it's all about.

(I have borrowed an illustration from the blog posting in question: I hope Tania doesn't mind. This isn't minimalism; but it is a place of beautiful comfort. And I covet that lamp.) 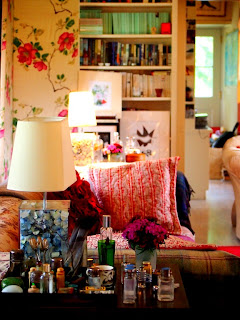