What's it worth to you?

I'm a great user of charity shops - both to buy and to donate. Some of my best clothing bargains have come from an assortment of splendid places around my beloved Norwich; my paperback habit is easily indulged at minimum prices.

Of course, my clients' discarded-but-still-useful items (not to mention my own) also find their way there. Not only does the charity benefit - whether it be Oxfam, the British Heart Foundation, the Cats' Protection League or any of hundreds of others - but so too do buyers like myself, happy to source a book for £2 instead of £9, a skirt for £3 instead of £30. And best of all, when the time comes to dispose of those items - decluttering the bookshelves or the wardrobe, either so the present items are less crowded or (perish the thought) to make room for more - the cycle of generosity continues.

However, I thought I'd try a different approach today. I'd been sent an online voucher by a friend to try out a 'book resale' site. You scan the barcodes, they make an offer for your item (books, DVDs, video games, CDs), they pay the postage, you parcel the items up and print the despatch label, and hey presto - money in your bank account. There are several such organisations springing up around the place, complete with their smartphone apps.

I had a major declutter of the 'novels' bookshelves. (I do this every so often: I'd say that at least 50% of my paperbacks are treated as magazines, read once, enjoyed but not retained.) I gathered around 40 items - mostly paperbacks, a few DVDs - and started scanning. 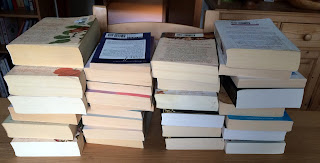 My resale site, to start with, rejected most of them. ("We have plenty of this title already and can't buy it today" being the gist of the message.) That was fair enough - most of them were pretty commonplace authors (an awful lot of Philippa Gregory historical stuff, to start with). However, I became a bit disheartened when, finally, the first book came up as accepted, the offer was 10p. TEN PENCE? Now, I might have paid £3-£4 in a supermarket for it, or £1-£2 in a charity shop; but at this rate, to reach my minimum of £5 worth of books, I would be getting rid of an awful lot.

In the end, I found 8 items they'd accept, with a total of a little over £5. (The highest value item was less than £3.) My online voucher means I'll be credited with just over £10. That's all very well; but then I looked again.

Most of those charity-shop items had cost, as I mentioned, around £1-£2. If Oxfam, or Dr Barnado's, could sell my Philippa Gregory novel for £1.50, that's a big markup on the 10p that I'm being offered. At my calculation, the pile of rejects - some 30 paperbacks - might, if they'd bought them, made me around a fiver if I was lucky. But at an average of (say) £1.50 per book, my charity shop could turn those 30 paperbacks into some £45. And I'd sooner that a good cause received £45 than that I received the price of a supermarket lunch.

In the end, I decided to sell those eight items and take the money; but only on condition that the remaining 30 books go to the charity shop next week. And, to be honest, because I was being offered a 'free fiver' voucher for trying out the service in the first place.

I'm sure that such sites do work well for some folks - especially if their book collections are a little more commercial than my own. However, when it comes to donating for best effect, it's seldom hard to find a charity shop nearby (and if you're a tax payer, you can gift aid your donation too).

As for me... I'll be dropping off those 30 paperbacks when I'm in Norwich next week - and will possibly find two or three new items of reading matter while I'm there. Double win.
Posted by Cassie at 16:56 No comments: